What I want to do

Teach three blocks of 50 minutes each on grassroots mapping to a collection of 6-8th graders in Grace Hwang’s Art of Politics elective at Trillium Charter School.

My attempt and results

The first day I introduced Public Lab and mapmaking using Grassroots Mapping Forum, and balloons using a hot air balloon and a hair dryer. The balloon set a great tone for the class. and then we set to all building PET bottle rigs. Much thanks to my neighbor Tasha for giving me so many soda bottles! There were a variety of skill levels, from very proficient to just learning to tie rubber bands together. The class was great at collaborating and skill sharing. We finished 6 rigs, and came very close with most of the rest. Grace has some photos, I’ll update this post with them.

The second day we went out flying for the brief 15 minutes it didn’t rain. I knew it would be tight, but by watching NOAA’s forecast closely, also knew we had a good chance of flying. Although nearing noon it was quite dark out (we’re in Oregon and its November). The rest of the time I showed slides and discussed in-depth Grassroots Mapping. Some students worked independently to finalize their rigs during the presentation. They asked pointed questions about Google maps and were an engaged audience. After class, I selected a cutdown set of the aerial images for the next day in the computer lab.

The third day we reserved the computer lab, and did a lesson on Mapknitter. We started by showing the basic idea of overlaying images using paper printouts. 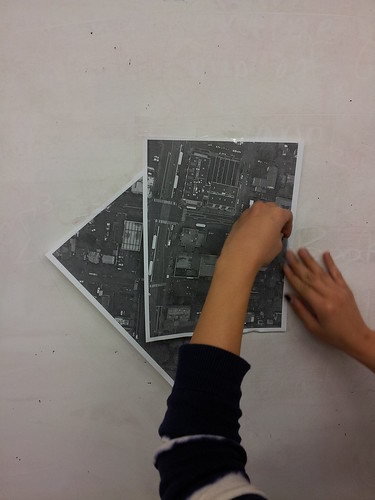 There was a hickup on the image sharing, as we uploaded to the classes Tumblr, and Tumblr gave us back 1600x1200 reduced-quality images. Some students accidentally downloaded 320x240 thumbnails. We only caught this later in the class. The students were excited about mapknitter, and a little disappointed when some of their maps came out low resolution. Overall though, most of the 7th and 8th graders quickly picked up mapknitter and were very engaged. Some of the younger kids had difficulty maintaining focus and staying on task/ on the Mapknitter website. You can see their maps here. Next time I will make sure to create a public Dropbox link so everyone can directly download the images. 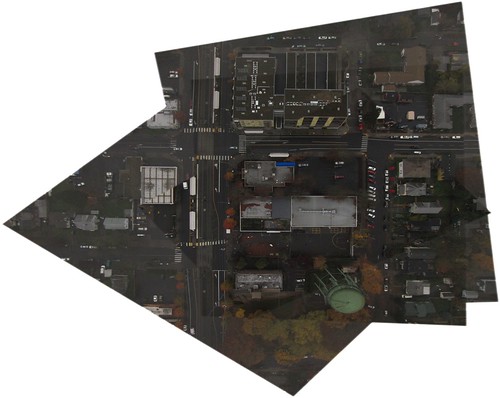 After the class, I thought it was a shame to empty the helium out, so I hitched the balloon to my bike trailer, threw some painter’s drop cloth plastic over it, and tied the drop cloth down at three points. This proved a very good way to move a balloon (in Portland, OR, where people love seeing large, slow moving objects on bikes. your mileage may vary. Part two, flying on Sunday for fun, will have to wait. 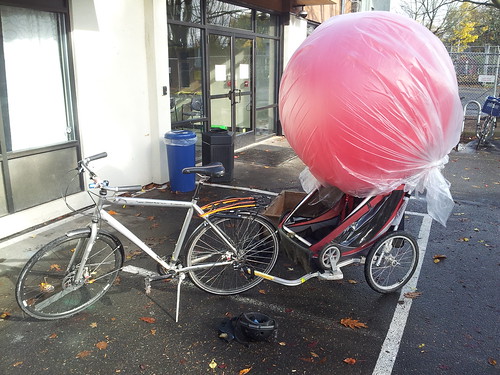 Questions and next steps

This was my first time working on Grassroots mapping with such a young crowd, and I was really impressed with their engagement and skill development. Rig building, as Hagit suggested, was a great and empowering start. It seemed to increase involvement and engagement during the flight, since they really understood the hardware. I wish we had a bigger, safer area to fly in so I could comfortably hand the balloon over to the kids, but what we had worked well. The paper printout lesson was a good one, although in the future I think I want to make printouts for every kid, and do it when they’re not sitting in front of distracting computers. Overall, it was a great set of sessions!